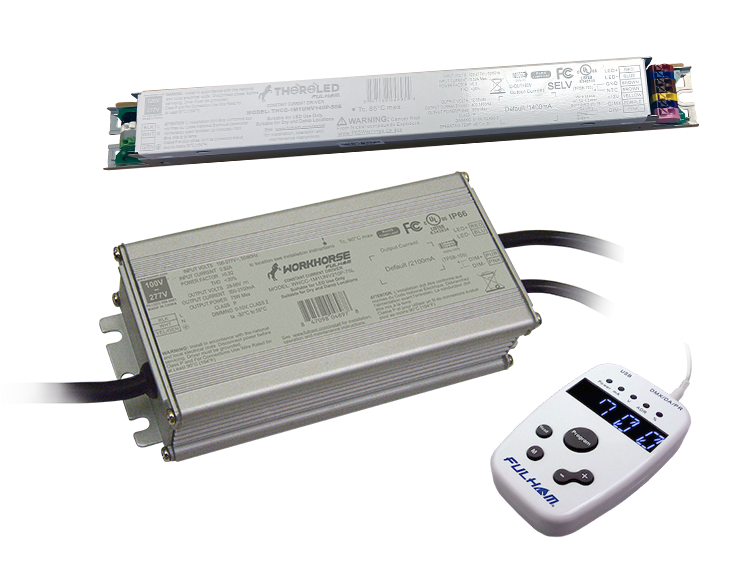 The best way to introduce the various types of LED drivers would be to consider two questions:

Emergency LED solutions are also available as a Fulham product program under the FireHorse or HotSpot LED brand names. The LED solutions provide backup power (in conjunction with modular batteries) to LED modules within luminaries during power outages.

And the Lumo Series is Fulham’s European LED driver line suited for fixtures sold to European OEMs & distributors or for fixtures exported into Europe.

Fulham’sWorkHorse LED brand of programmable LED drivers offers unmatched flexibility, ease of use, and SKU reduction. “Programmable” means that the output current can be set to meet the in-field or factory application needs.

This flexibility is advantageous when finding creative ways to substitute or replace difficult components to source during component shortages (since electrical components are much harder to come by right now, and are expected to be a challenge through 2023).

It can also mean larger orders of one type of item / one SKU, for economies of scale when ordering in bulk/volume pricing (and lower per- unit pricing), versus buying smaller quantities of dedicated usage LED drivers with relatively more limited, specific purposes.

Generallyspeaking, if you know in advance the exact needs and specifications for your luminaire, then ordering a dedicated Fulham ThoroLED LED driver is likely to be more economical than a driver with more built-in versatility, but that is the trade- off.

If your needs change along the way or if you do not use up all the drivers as anticipated, then the remaining unused LED drivers are only suited for specific purposes with that exact output current. By contrast, programmable ones can be repurposed for many other uses, other fixtures, other jobs, other applications, etc, as long as you have the correct power supplies.

The HotSpot Emergency LED product program is also incredibly notable for Fulham; innovations in LED EM solutions have become synonymous with Fulham, only second to the recognition in the market that Fulham has enjoyed for decades with its WorkHorse ballasts.

Another brand name used by Fulham in conjunction with its Emergency systems is the FireHorse brand, FYI.

Last but not least, the Fulham LumoSeries family of LED drivers is specially designed in our European Design Centre to meet the demands of the European market. Fulham LumoSeries LED drivers are built on core engineering design principles for exceptional performance and reliability standards in LED lighting systems.

The simplicity of specification and installation is a vital characteristic of all Fulham LumoSeries LED drivers, hence the wide voltage and current ranges and industry-leading low inrush current.

And lest we forget, Fulham India has expanded its LED driver offering to include several outdoor, wet-rated driver options and its ample assortment of indoor LED drivers for the domestic India market. These are also marketed under the ThoroLED brand. Still, there are India-specific brands, too, such as the IronHorse outdoor LED drivers, RaceHorse LED drivers and WorkHorse Plus LED drivers – exclusively in India.

What is an LED driver?

Now let’s take a step back to ensure that everyone is tracking with all of the terms and explanations on this page. An LED driver itself is an electrical component (a power supply) that is to an LED modules/arrays as an electronic ballast is to a fluorescent tube (or as an induction generator is to an induction lamp, a transformer is to a halogen lamp, etc.).

With Constant Current, the LED driver feeds a steady current through all LEDs on the module. Since each individual LED requires a specific voltage for the current to flow (known as Vf), the driver must provide enough voltage to equal the total of all the voltages of that module’s LEDs.

Note that while the LED module is designed frequently with all LEDs connected in one continuous serial electrical chain, it is also possible to create branches that split the current flowing through the module. Therefore, it is essential to understand the design of the module’s circuitry and the electrical rating of the LEDs themselves when connecting a Constant Current driver to Constant Current LED modules.

Constant Current architectures offer higher operating efficiency than Constant Voltage but less flexibility in connecting different modules and LEDs to the driver. With Constant Voltage, on the other hand, the LED driver provides a steady voltage supply that enables power to flow through all LEDs connected.

Since any given current flow requires a specific amount of voltage for each individual LED, it is necessary to buffer or regulate the voltage with a resistor (or equivalent component) in line with the connected LEDs.

As discussed with Fulham WorkHorse Programmable LED drivers versus ThoroLED general usage LED drivers of dedicated current (above), programmable drivers give users the power to create the right driver for any situation.

Programmable attributes include output current, dimming curve, and lowest dimming percentage, allowing the driver to match the output of existing luminaires or serve as a flexible platform for new luminaire designs. Programmable drivers that are readily available in stock can also substitute for dedicated LED drivers of more limited function when they are harder to come by during electronic component shortages.

Regular LED drivers of specific outputs are specifically and only suited for that one purpose and cannot be changed later. Generally speaking,they are likely to cost less than programmable drivers, but you can also do a lot less with them.

Being in the field, programmable LED drivers allow for SKU reduction and time savings since you don’t know what you’ll encounter on a job site. Having a programmable driver replacement could make the difference between needing to revisit the electrical distributor with precious time or using that time to program a driver. Finish your job and go!

How to install an LED driver

Many Fulham drivers are designed with a small overall footprint to be used discreetly in thin or narrow, elegant architectural fixtures.

As with all of Fulham’s products, our LED driver program is built on the promises of high quality and standing by our items as a 25+ -year old company with a U.S. headquarters and a U.S. warranty.

This can make a material difference compared to buying from unknown foreign sources that most likely haven’t been in the business much longer than their warranty expenses. Additionally, you don’t know how long their business will last or if they will honor their warranty if challenges occur.

We use cookies on our website to give you the most relevant experience by remembering your preferences and repeat visits. By clicking “Accept”, you consent to the use of ALL the cookies.
In case of sale of your personal information, you may opt out by using the link Do not sell my personal information.
SettingsAccept
Privacy & Cookies Policy

This website uses cookies to improve your experience while you navigate through the website. Out of these cookies, the cookies that are categorized as necessary are stored on your browser as they are essential for the working of basic functionalities of the website. We also use third-party cookies that help us analyze and understand how you use this website. These cookies will be stored in your browser only with your consent. You also have the option to opt-out of these cookies. But opting out of some of these cookies may have an effect on your browsing experience.
Necessary Always Enabled
This is an necessary category.
Non Necessary
This is an non-necessary category.
Save & Accept
Powered by